New bike new post.
I’ve been looking for a deal on a new or barely used 2018 Beta 300. One popped up a mere 3500km from my house, so after 2 months of it sitting in the want ads, I pounced! With some risk involved, I bought it site unseen. Save for the no oil in the tranny (more on that later) the bike was perfect. 25 hrs of use.
Managed to get it to my door cheaper than buying locally.
Big thanks to my buddy Serge for helping facilitate the sale. 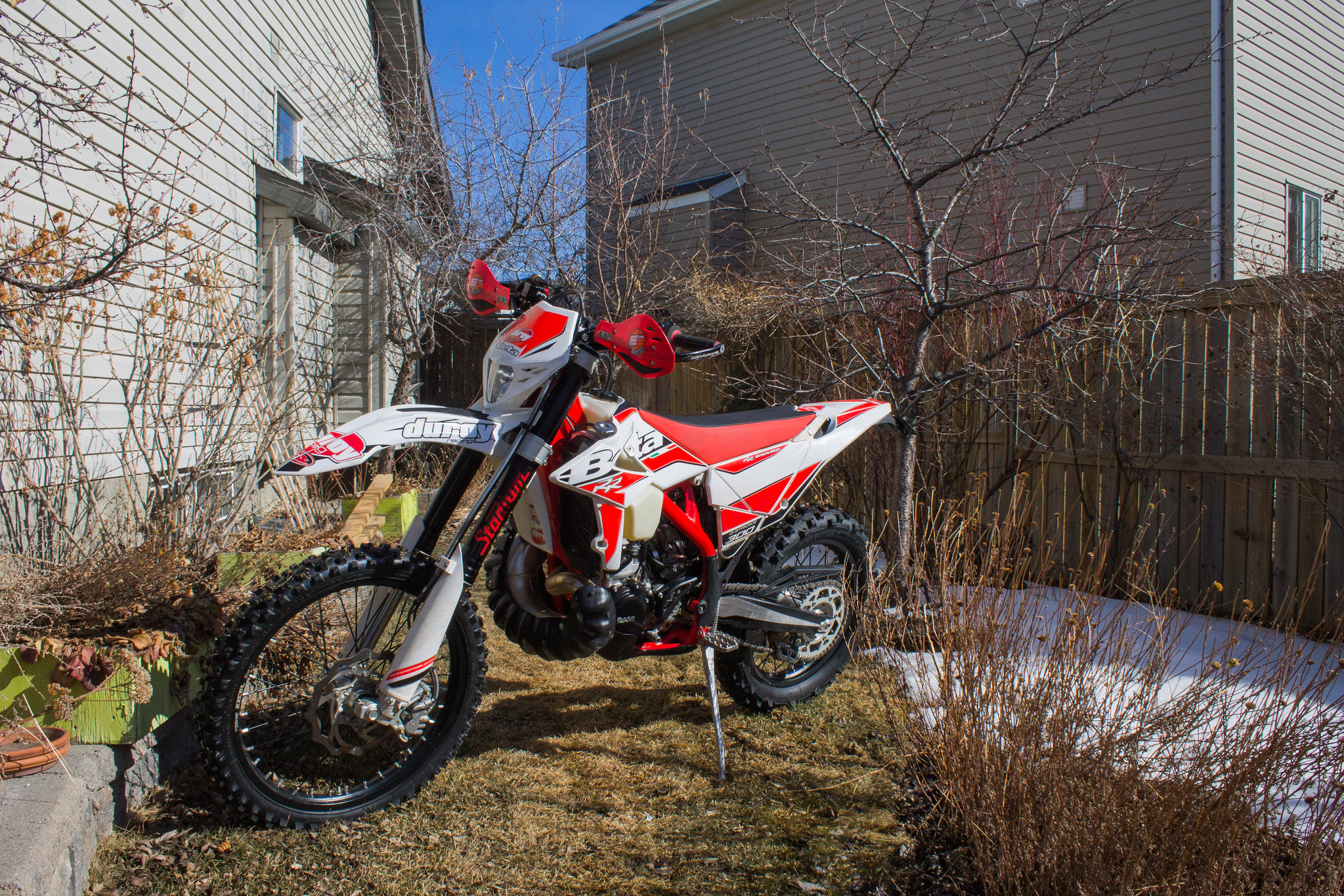 Delivery was done by Simon from Protechnic transport. Excellent guy to deal with, and very reasonable. https://transportprotechnic.com/

(Front to back)
-Winter studded mitas tires/rims. Good news here. My rims from my 2014 XC300 bolt right up, including the disk. I ran some ebay cheepies on my KTM and got another set on its way from Chiiiiiiiiina! I think they are less than $60 for the set.
The rear rim/disk combo fits, but is 5 or 6mm wider, and will be sorted by getting a 2nd set of spacers, and machining the right (disk side) spacer down by that amount. For the time being I’m running mis matched rims. Behold! 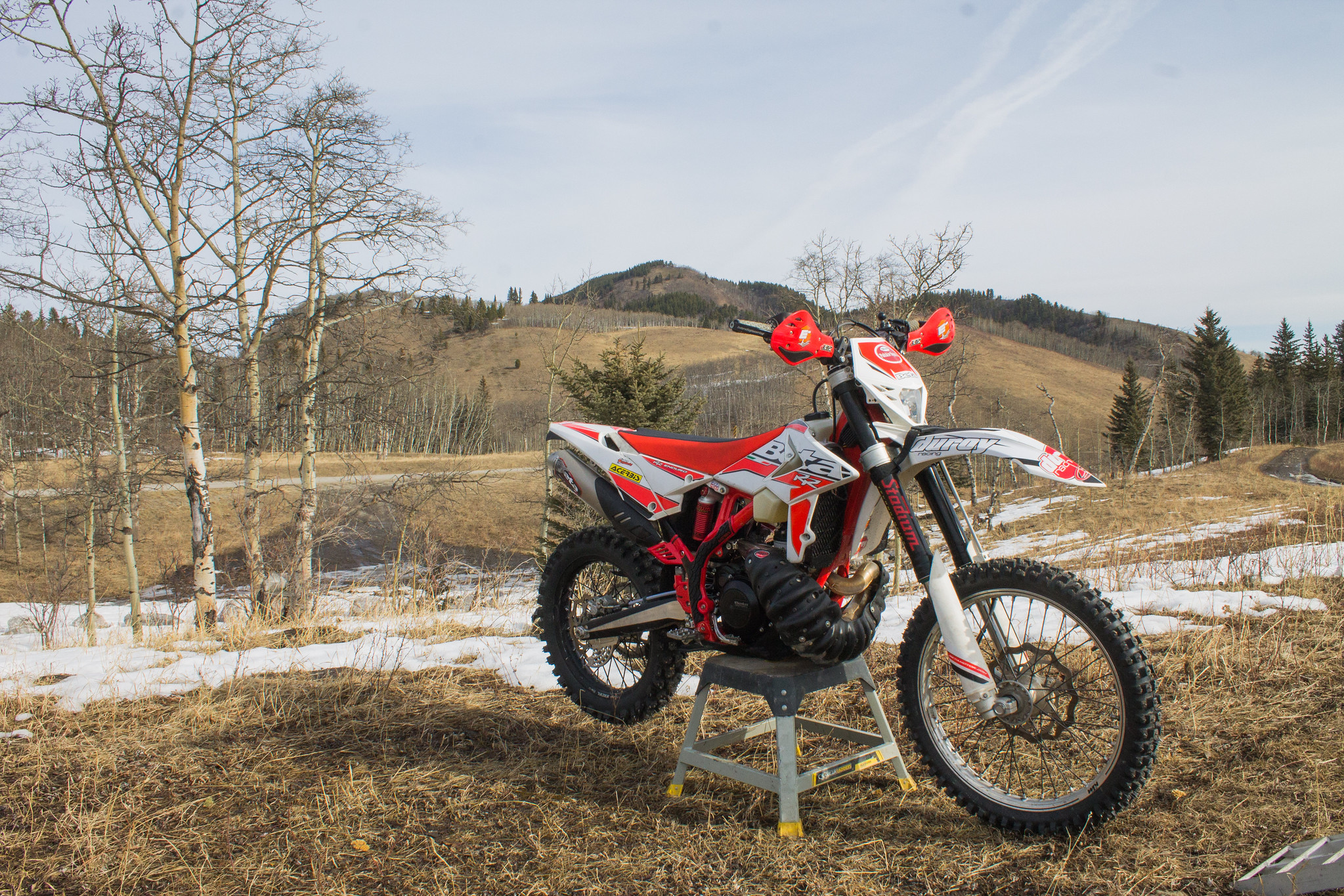 -Front tug strap. I need help often while crashing around in the woods…Rear grab handles do the job well, so no tugger at the back
– Flexx bars, and isolation dampers from my XC. Straight bolt up
-Fork bleeders (Motion pro jobbies)
-Aluminum throttle tube and throttle cams (stock cam on).  Have a hotter cam (30%, and 30% milder..only use the 30% milder while I first started riding)
-Hour meter. Had a Chinese one kicking around the garage.  The OEM jobbie does a good errr…job but nice to have a 2nd reference.
-Acrebis frame protectors. Higher than OEM jobbies, and have built in rubber grips. I also took a bit of clear film over the top of the frame for moar protection. 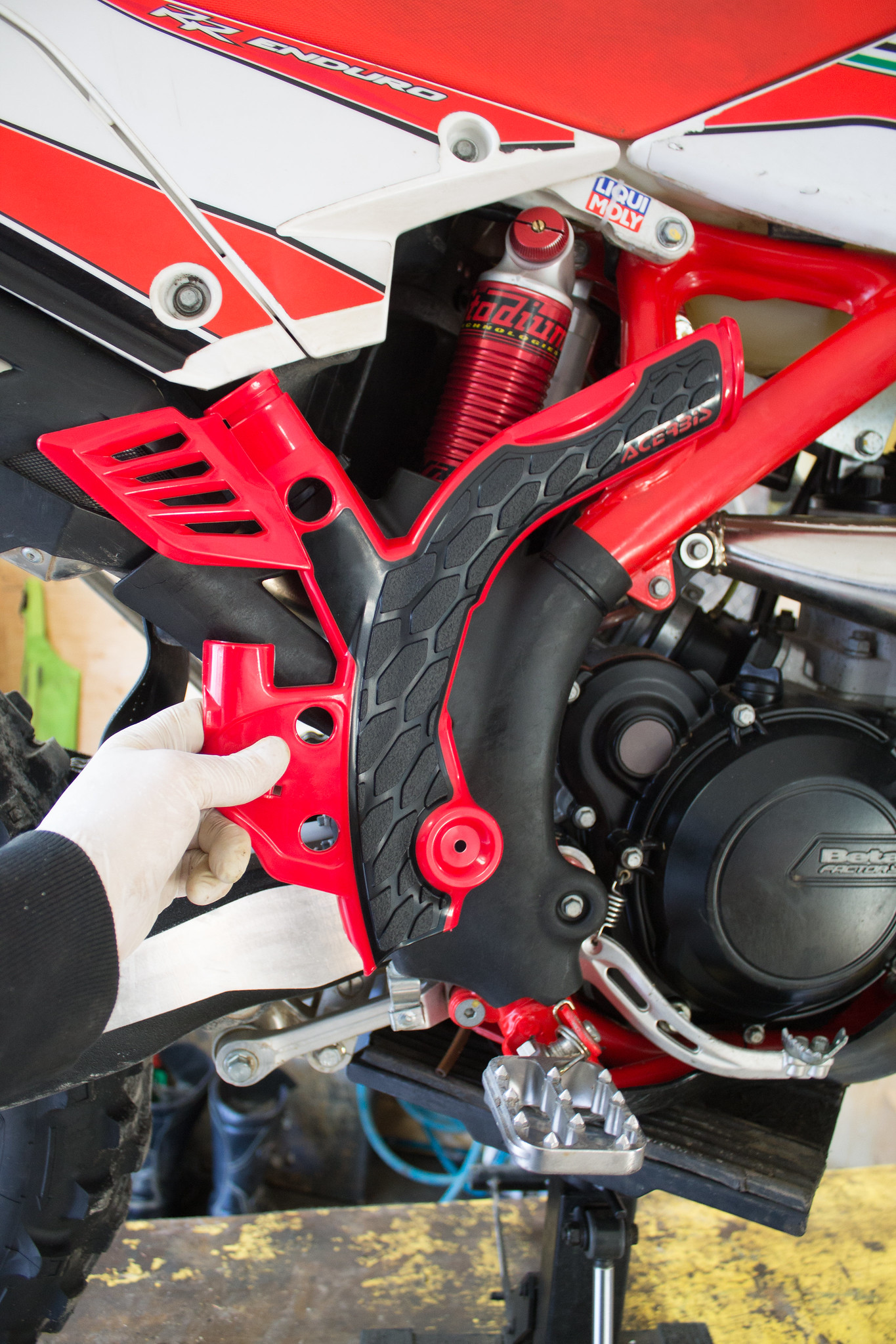 -Linkage protector. I ran a full one on my XC. I wanted something relatively simple and cheap ($50). Behold! 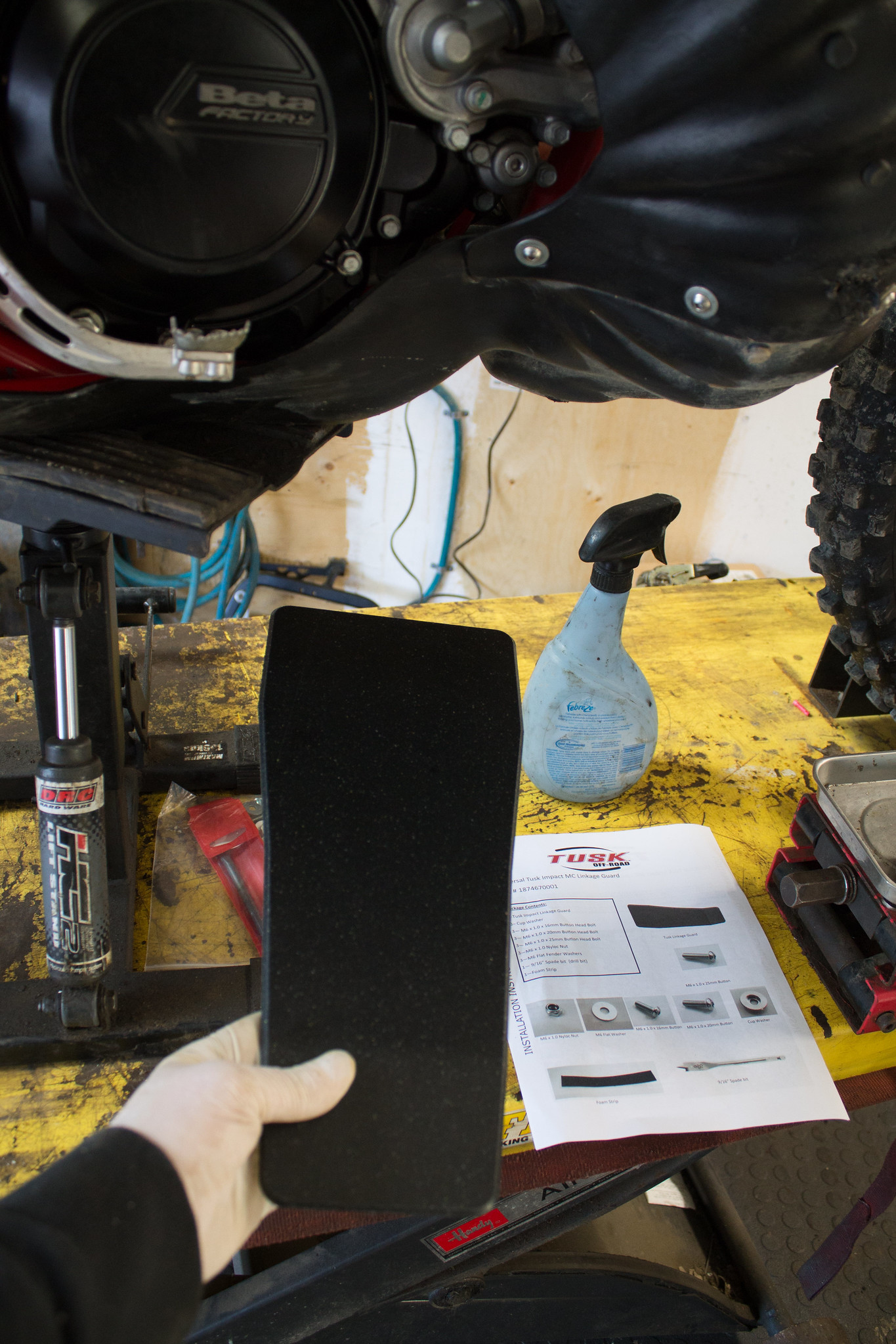 Install was relatively easy, and it covers the linkage well.  Zoom in on the below for a finished product for a lookie see! 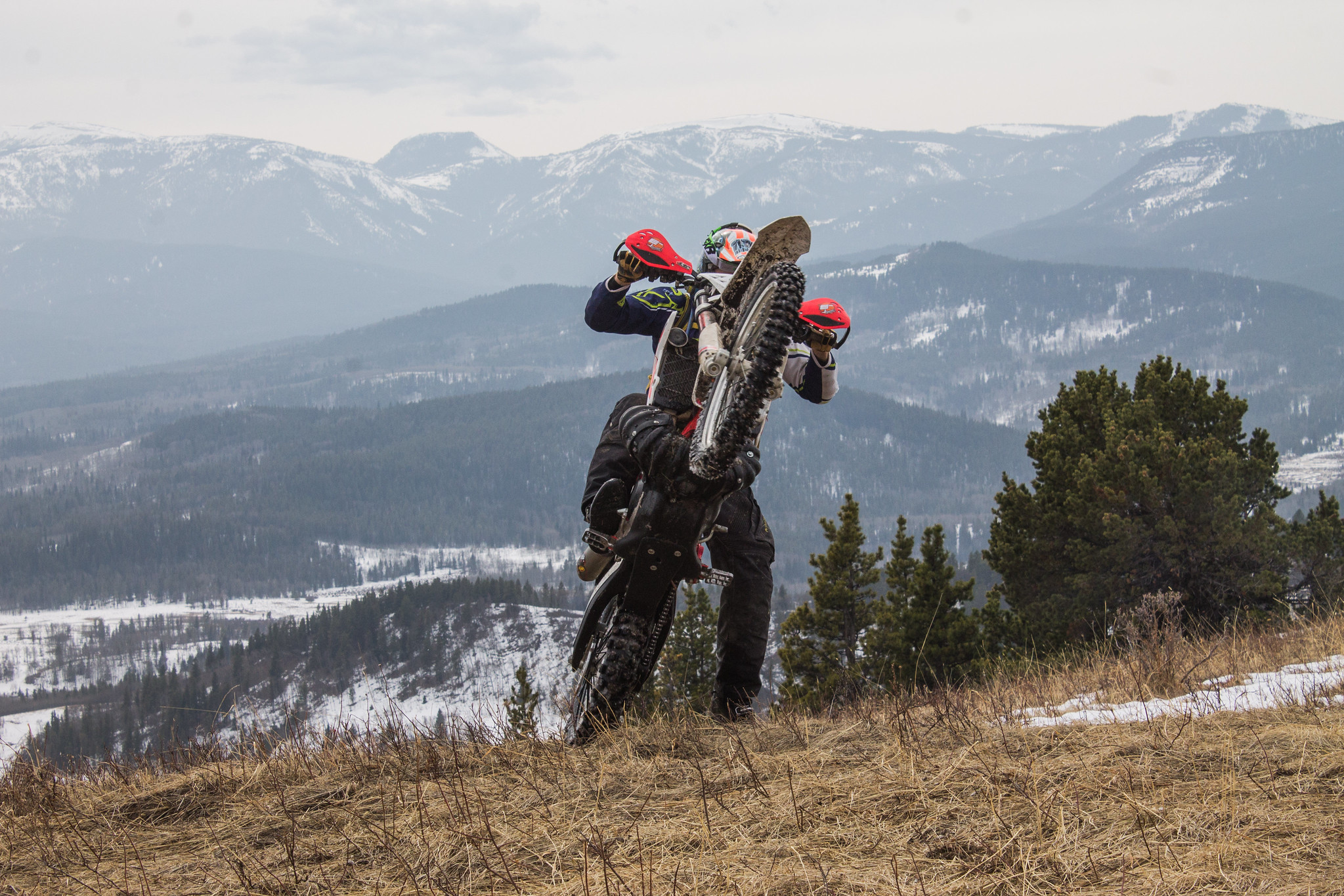 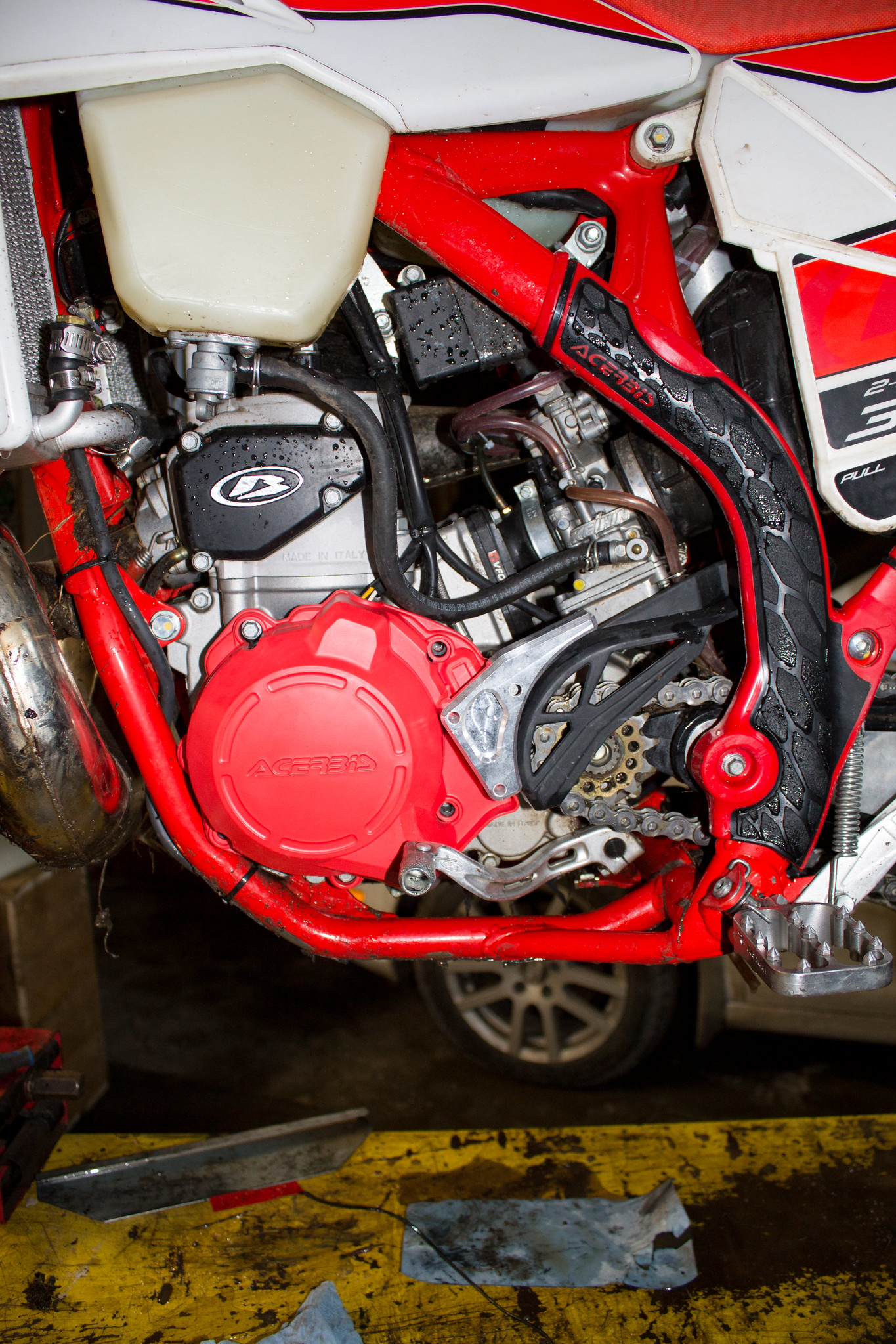 -P tech case protector. Simple and clean and cheap…($45).   As a bonus the OEM chain guard stays on, and keeps the crud off. Shown in pic above!
-EE shark fin. It’s a nice looking piece which was well priced ($95). You do need to remove the OEM brake slider thinghie… 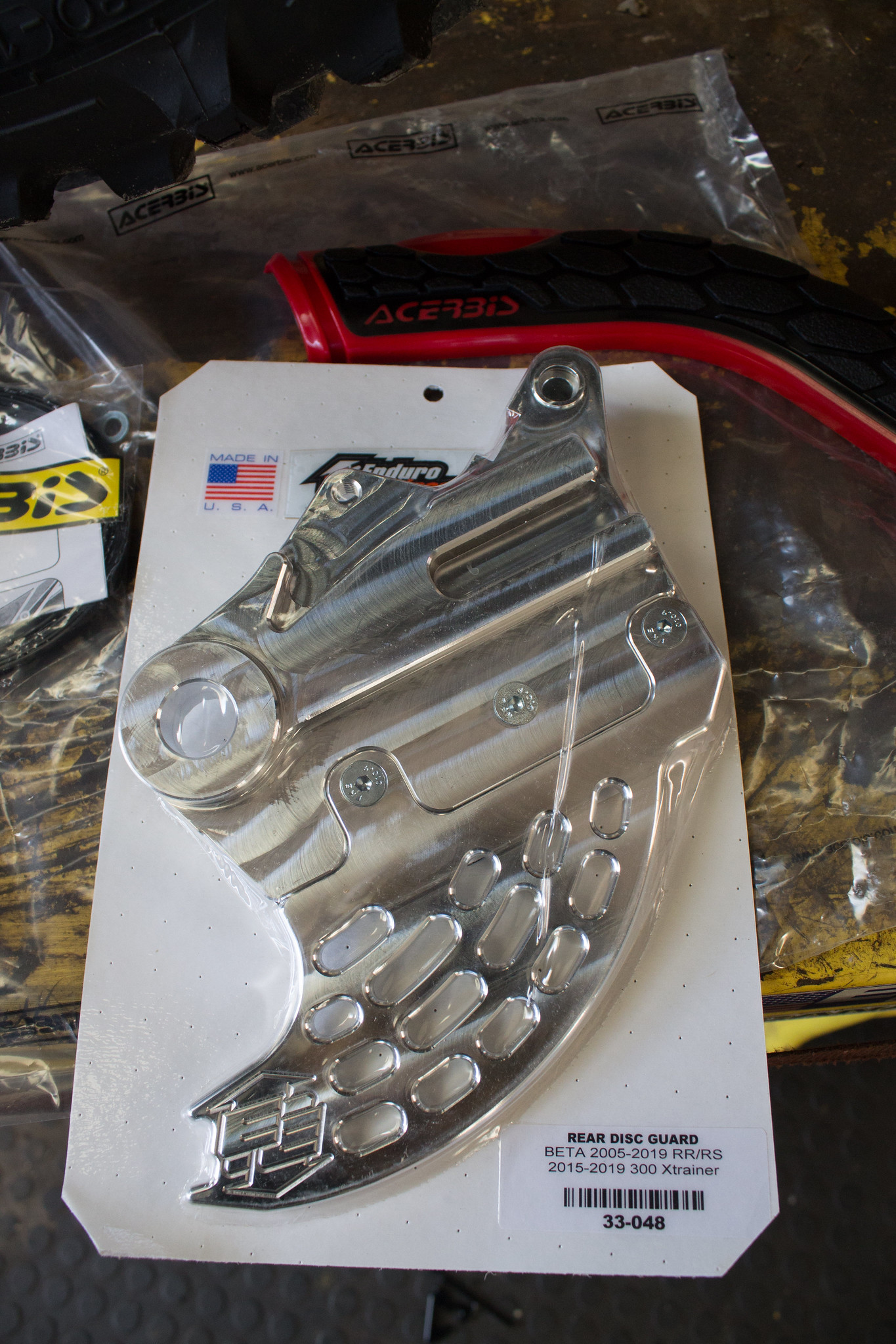 -BRP Chain guide. It’s damn beefy compared to the OEM jobbie. Bonus, the bottom slider comes off, so no need to take the chain apart 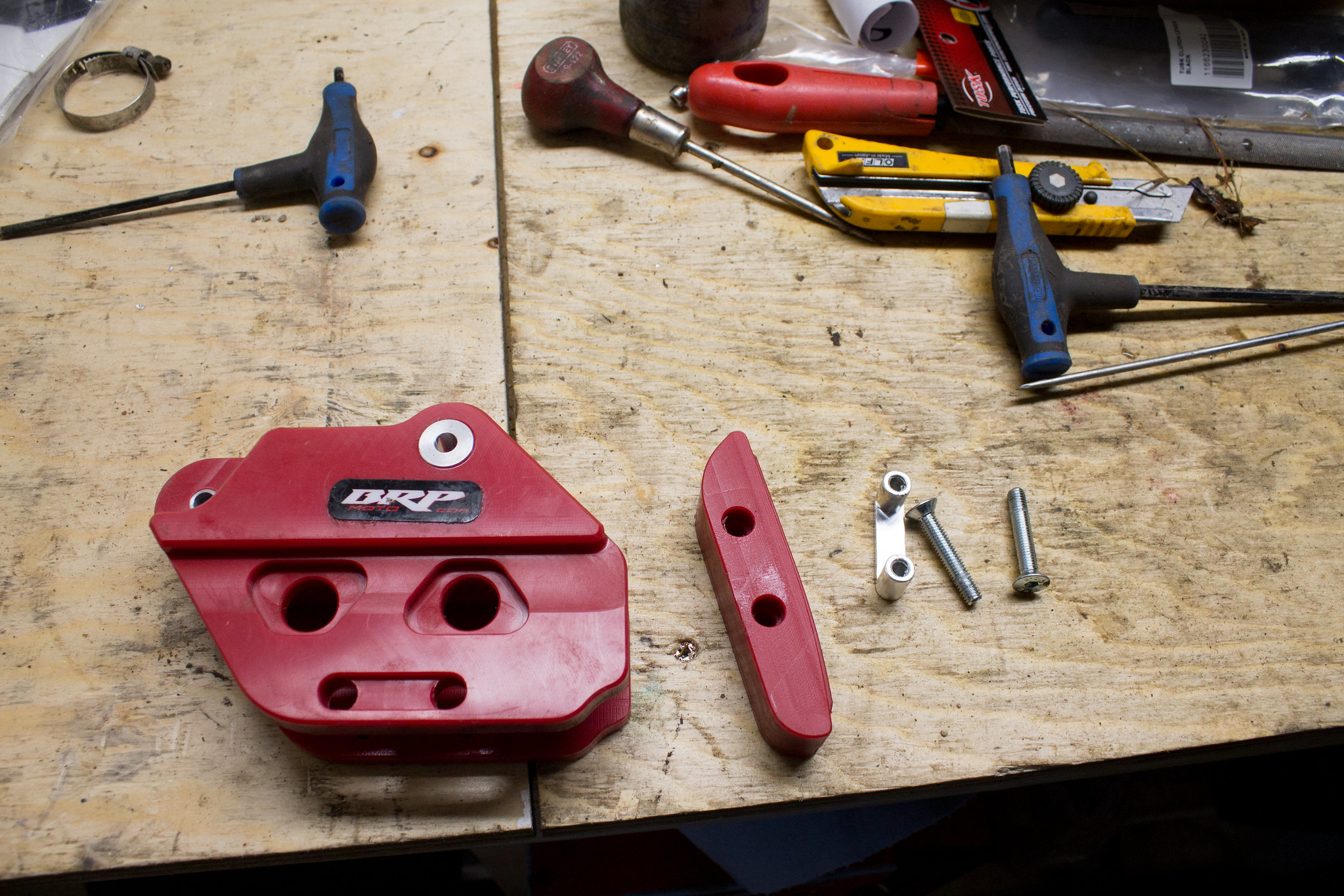 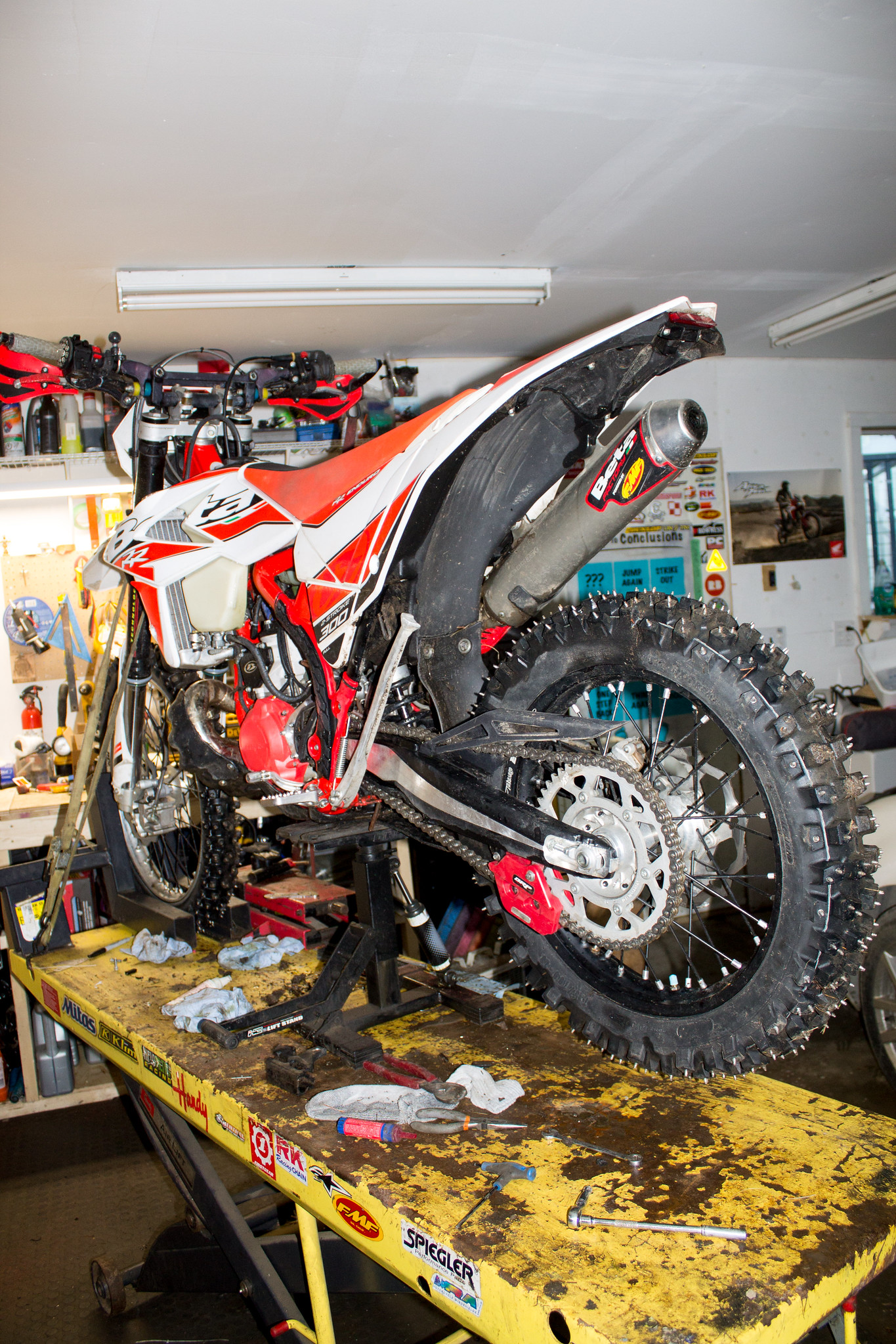 Bike once over, and BETA known issues.
I followed Barry’s excellent vids, and suggestions. All of them were checked, and done on my bike. Excellent breakdown of the issues below.

I typically like to go over my bikes before I go ripping around. This thing was basically new, so I assumed that all fluids were good till the 1st change, which in the tranny’s case is 15 hrs from now…

Engine.
-Comp. check: Once I borrowed a short neck compression tester. WOT, three separate readings gave me 156-158 PSI.
-Squish:  My xc had a very wide squish band. It ran fine, but there was room to improve. The Beta had a squish of roughly 0.074-.076″ squish. I will remove the head and shave off 0.02″. This will likely gain another 15-20 compression points, cleaner burn, and obvs..even more low down grunt. All of the above made my xc run better, logic dictates the same for the Beta.  Richard did a great job on the XC head.  Beta head on its way to him.
-Carb: JD jet kit. Red needle on 4th clip. This one is a bit rich for my typical 3000-7000′ range. Will move up one. 38 pilot jet, and 162 main. These will stay as is. On the two rides so far, bike is crisp, with a tiny bit of splooge on the muffler.  I also have some free air and idle screws coming from Evil Greg! thanks buddy!

Suspension
-Forks/shock: I didn’t get a chance to set sag yet, but the re-valved forks and shock feel plush. I didn’t have the bleeders installed, but will give it a go this weekend with them in. I will likely play with oil level only on the front forks, so all good there.
-Fork:  guards on older models have tendency to rub the fork uppers. There’s a small metal clip at the bottom of the forks. I added a big tie wrap on each leg, with the head facing forward 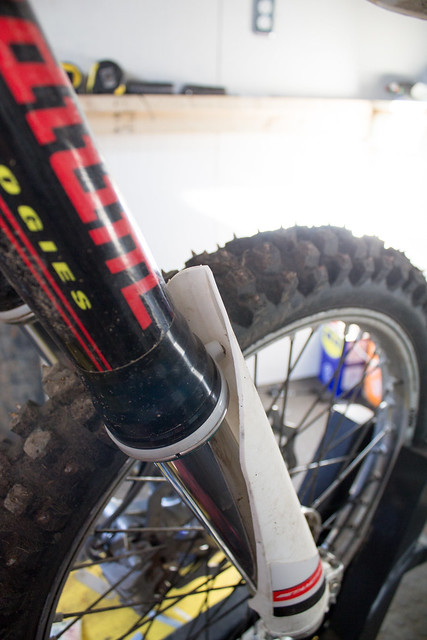 -Linkage. Pulled apart, cleaned, and re-greased. Note..book has some retarded torque settings for the bearings, ranging from 70 to 90 Nm…which seems insane. I torqued all mine down to 36 FT LB, c/w red loctite.

Body/frame/exhaust
-I went over the electrics, and tied up some wires, esp. at the front by the headlight. Otherwise, it all looked pretty good 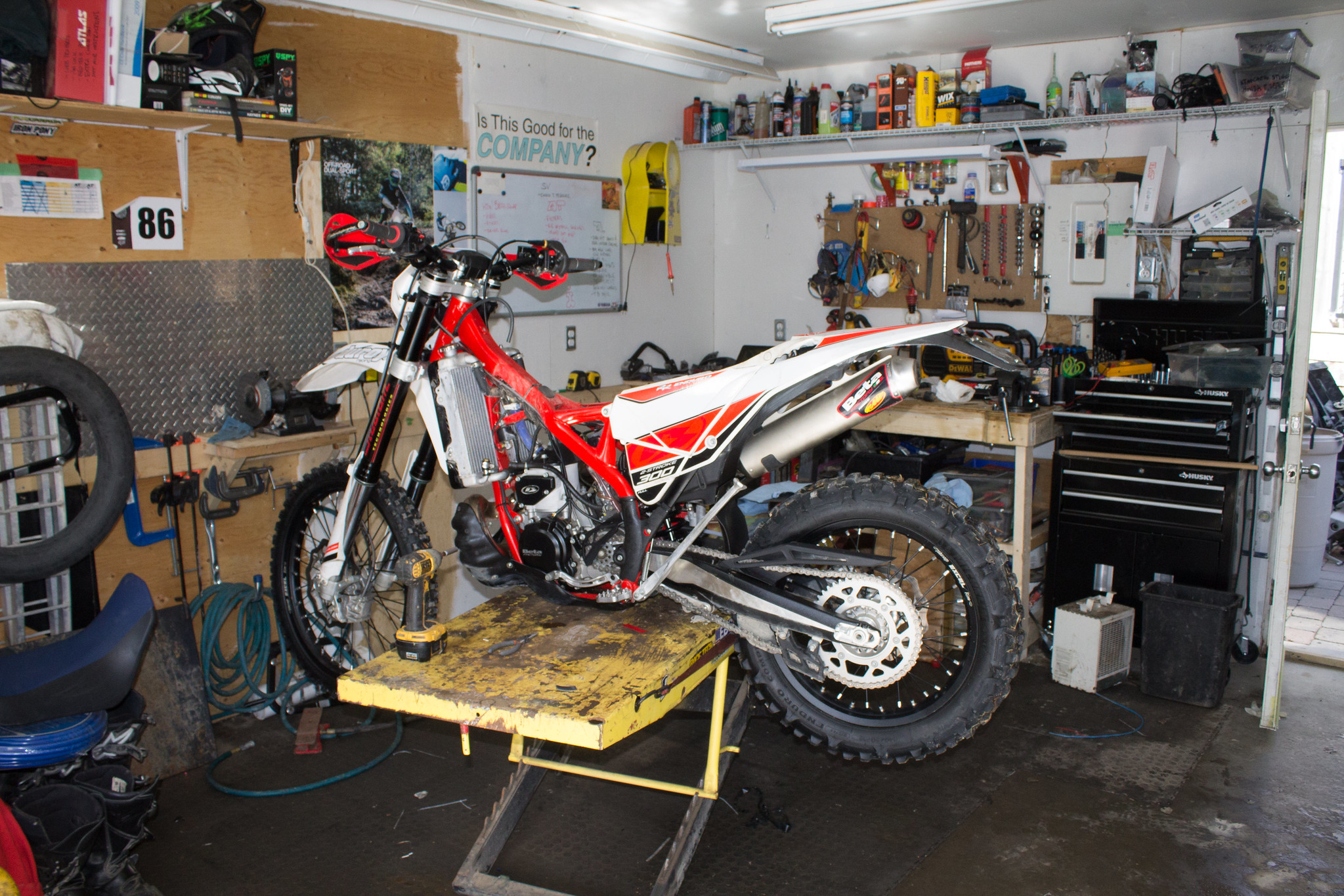 -Exhaust rubber seems a bit flimsy. I tied two giant tie wraps, and left them long in case I need to snug them up again.

-See Barry’s vid above. All well explained
-Plastics. Yep…the 2018 plastics seem better, but not KTM grade. My front fork guards already have one eye bolt broken off. I did cut off the tip of the OEM rear fender just as insurance. 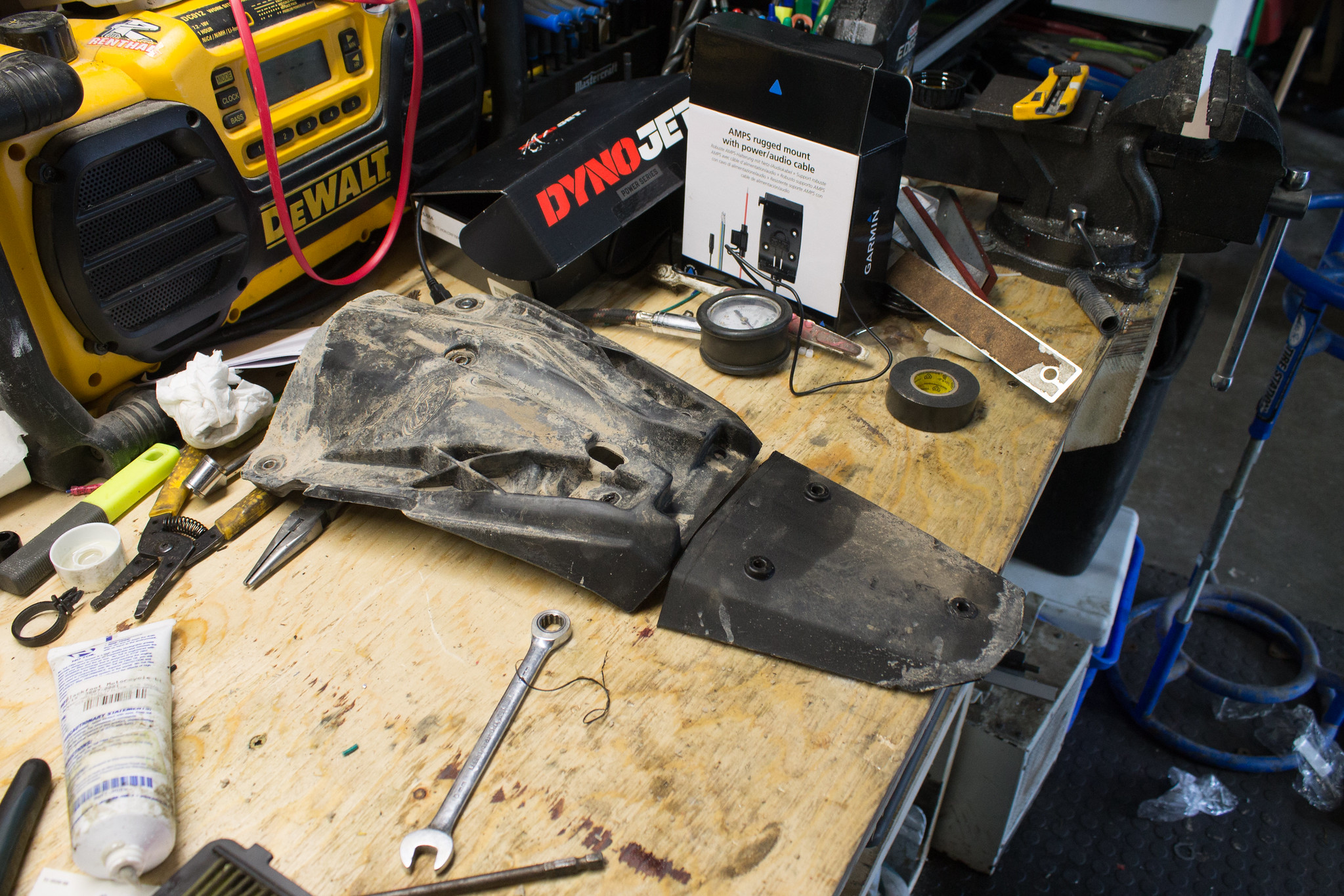 The OEM stickers are starting to peel etc..so there’s room for improvement
-The airbox retaining clips have lame rivets. One of mine was ready to fuck off at 25hrs.. Drill out, and replace with beefier rivet
-OEM seat. Likely just me, but I like to sit on the back of the seat to get traction…for obvs. reasons (KTM pictured, but you get the idea) 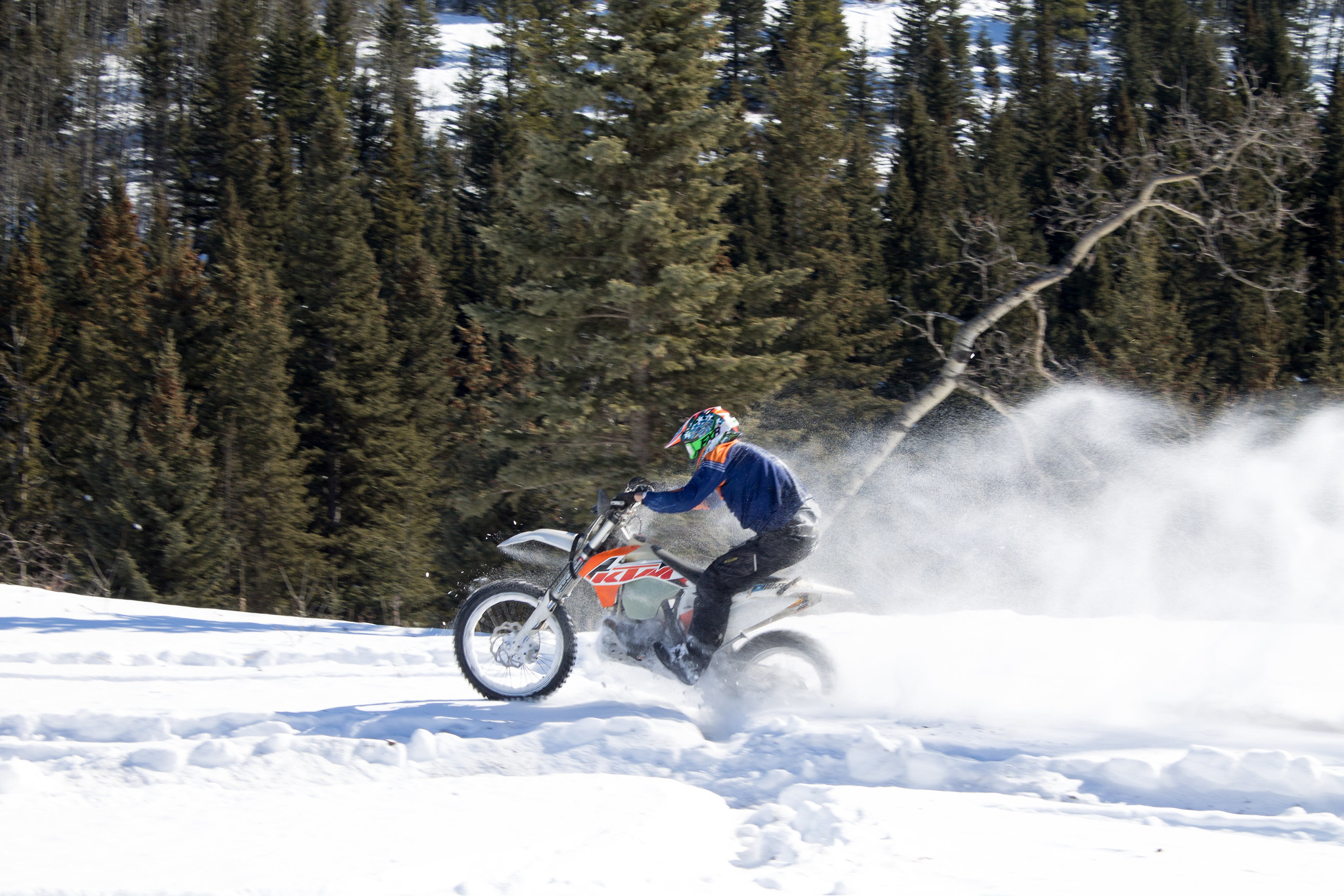 I’m at the back of the seat all the time, and basically on the fender. Seat seems short…but again…likely just me. I’m not a big guy (5’9″) and the bars are set at the mid mount on the triple…might move it up to the top mount.
Foam on the seat leaves something to be desired.
-Barry mentioned that there’s some issues with 2018 main bearing…as in the main engine bearings. Geez…long of the short…or short of long.. when the main bearings were pressed in, they were not pressed in evenly, putting pressure on the inner race of the bearing. A small amount of Beta’s have failed. As of this update, i’m at 85 hrs with zero issues. Fingers crossed. Another excellent vid from Barry here, very well explained:

Initial thoughts
I only had two rides so far on the bike. 1st was far from ideal. Way too much snow. I also found out that after assuming wrongly that all fluids were present in the bike, it turns out the tranny had zero oil in it. No matter. Added some in and enjoyed the rest of the ride. 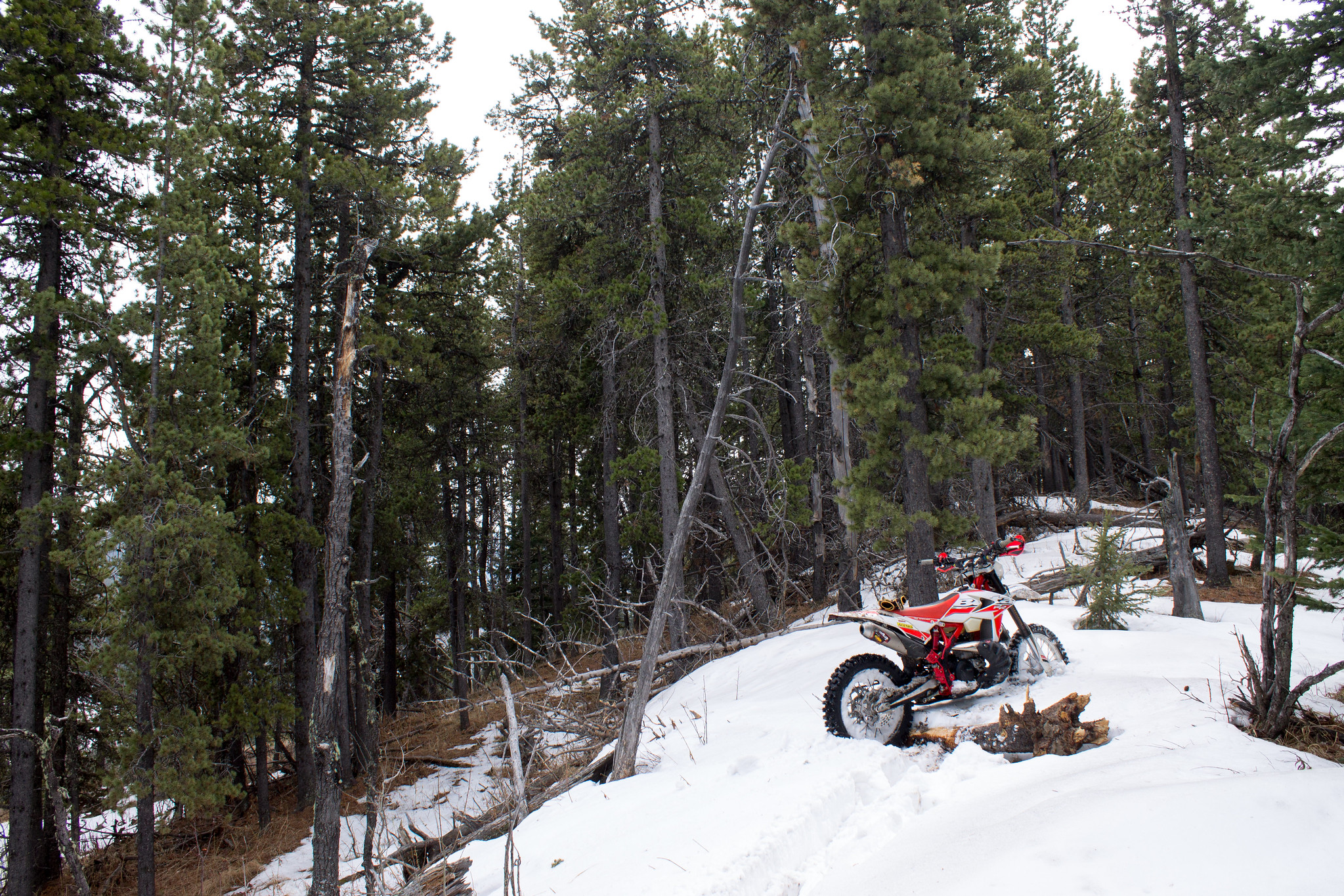 2nd ride went much better. We actually got to ride. Mixed conditions with packed snow, ice, mud, and exposed rock/grass.
The Beta feels very grunty even in the soft power setting. Easy to balance in a tight rut (mud, snow, ice).
I do notice the slightly lower stance of the bike in comparison to the xc.
The functioning starter is a god send. In gear or in neutral. A working starter, what a concept.

The steering lock is a bit limited.  The rad guards don’t help, so for now the bolt and an nut are in.  May replace it with a few washer to gain a mm or two.  Moar reason to get the pivots down.
The bike comes very well equipped with:
-FMF full exhaust
-good open cartridge forks and a decent shock. The valving for me is a bonus.
-Reeds that are not made in a dark back alley of Munich (v-force reeds on the BETA as standard)
-A proven carb (pre 2016 pumpkins were good, same Khein carb..2017s got fiddly with the Mikuni)
-Good quality rims, and black too. the 2017s looked ghay in silver
-tasty starter (sadly no kicker)

On the other hand, the plastics still feel flimsy and will not fare as well as the Bavarian blasters, besides the shitty stickers, rivets, and some odd ball torque settings (96 Ft-lb for the rear wheel!?) it’s a very nice bike.

Looking forward to logging some more hours on it. Will update as I do. 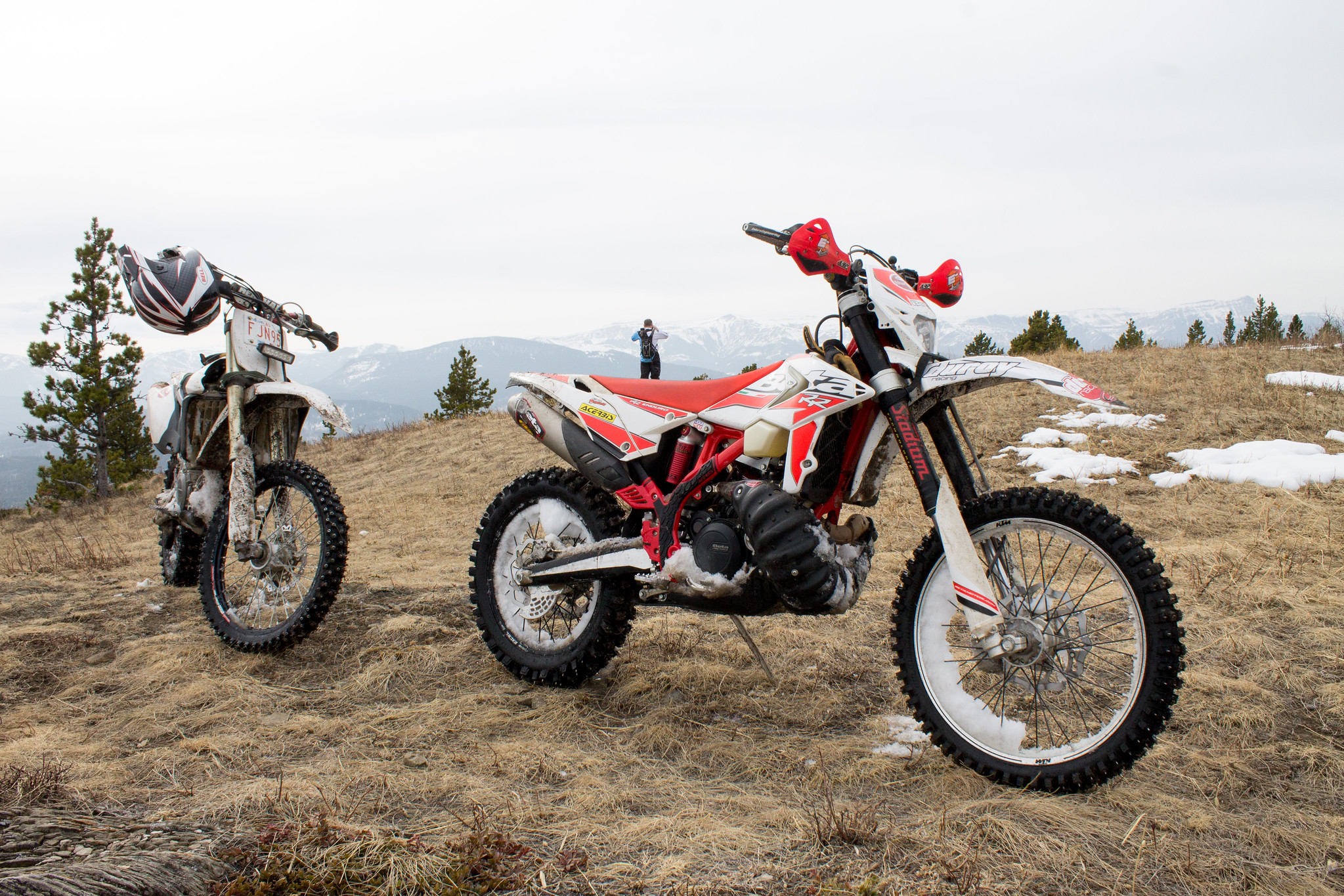 Had a great shoulder season ride on Saturday. Studs very much needed. I’m very impressed on how well this bike balances. In deep single track snow ruts (read, one tire width) with enough speed, it hammers through the stuff. 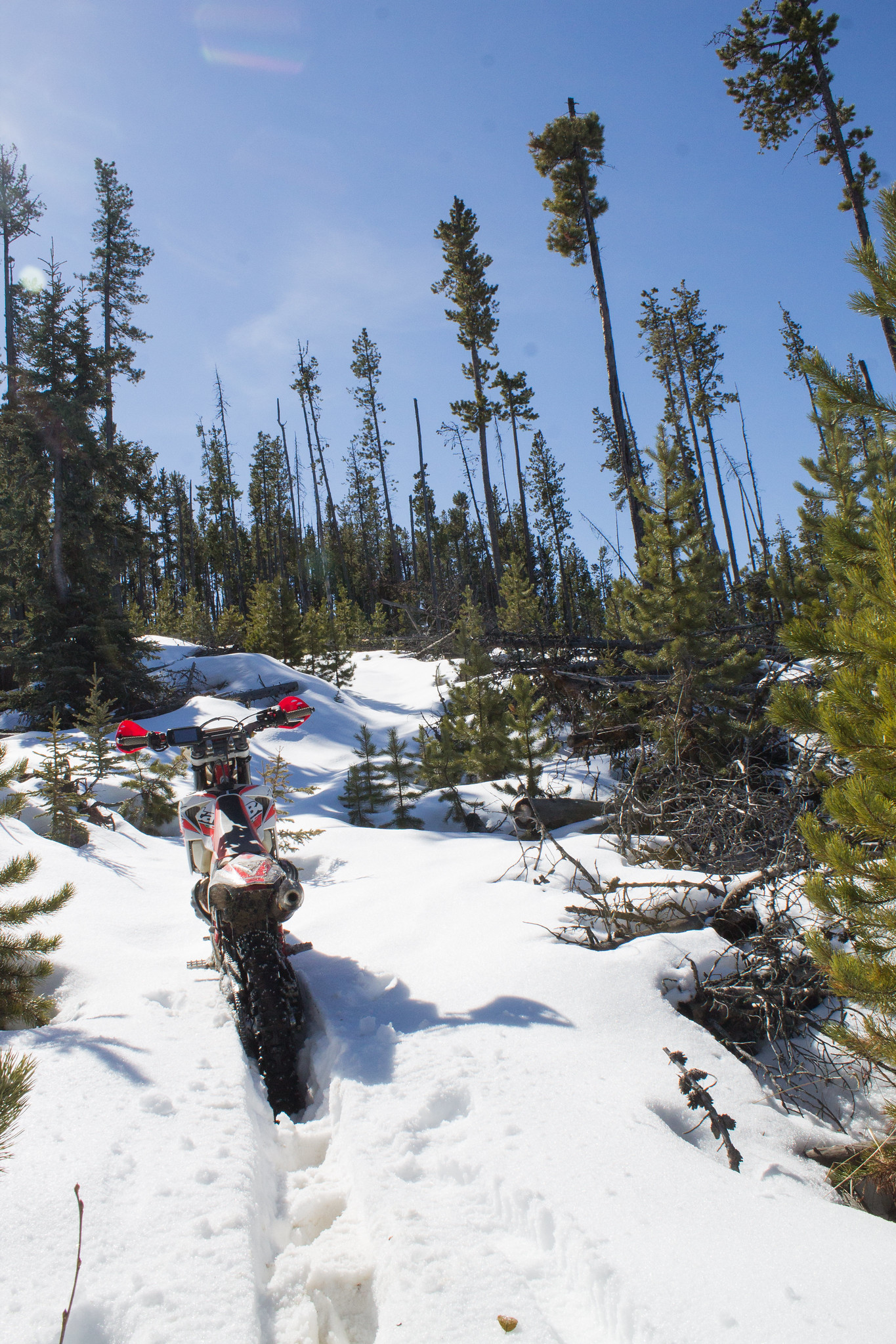 90 HR update:
Right, about 85 or so hours on the bike. 60 hrs logged by me so far. Thoughts..love it. I absolutely love this 300. It’s physically smaller than my xc/xcw 300. That said, it heavier than my buddies 2017/2018 TE 300s.
As mentioned above, the steering lock is more limited than the BB (Bavarian Blasters). That said, because of the smaller statue of the bike, it simply turns better through the slow and technical stuff. Big thing here as well, is that the wheelies, and pivots seem to be easier, likely due to size.

Gearing is a bit different than the BB..typically they are 13/52. Beta is 13/49.
The shifting is a bit notchier. I change the oil every 10k, and it makes no real difference.
The more technical the terrain, the better the bike works. Magic. 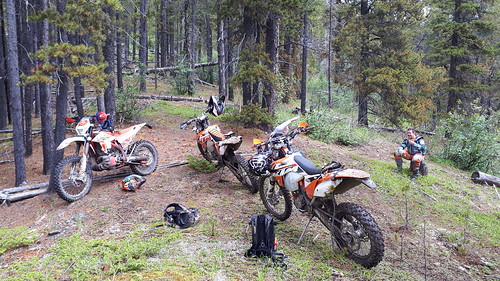 110 HR update:
Overall bike. How has it faired?
Well. It’d done very well. I change oil every 10 hrs, and check the filter.

The injector light went on a while back while doing a hare scramble race.  Gman told me about the shitty wiring on the return grounds…shitty Italian wiring…who’d of thought! At any rate, they take several ground wires, and use a C clamp, then crimp it shut. Mine looked ok. I simply soldered it back together, re-taped, and re-heat shrunk the bundle of wire. No issues since.

The plastics are holding up well. No breaks to speak of. The stickers however, are about 40% gone. They simply do not stay on like KTM stuff does.
Wear items are just that. They wear.

While I had some time off, I pulled the swing arm off to check the bearings.  Good amount of grease from factory.
All linkage bearings, including the low shock bearing looked good.
Re-greased and re-assembled.

Fork seals are good (SKF after all as standard).

I change the front sprocket when it starts curling. The OEM chain is just about toast, mostly due to the rear aluminum sprocket wearing it out.

I got word from Gman that his 2016 300RR annodizing was gone on his forks.
He noticed his suspension deteriorating badly around a 130 hrs. I decided to jump in and check mine.
Well…it wasn’t good 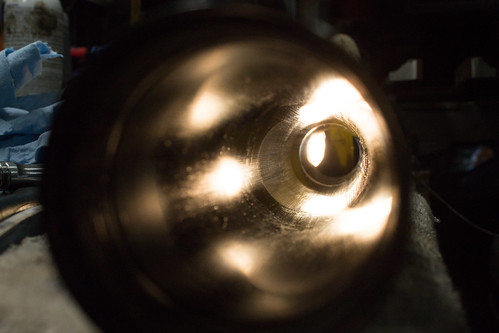 The anodizing is gone right around the upper fork tube, at the lower triple location.
Speaking to a dude that knows his metals inside out, he basically said that anno will act like paint on a wall, and simply not stay on if there’s flex present. 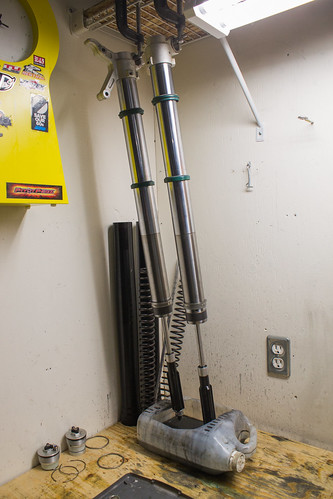 Short of magically making the tubes stiffer, I found a local place to do type three hard anodizing on the forks.
Two things might happen.
The new anno might wear just as fast as the old, or it may hold up better than 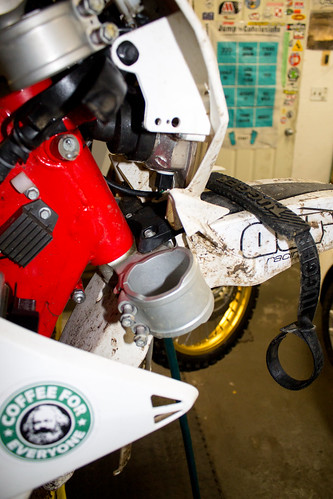 Tubes are back from the anodizers. They are 775 Aluminium and I opted for the natural color. It turned out well. Will see how they hold up with use. I currently have ATF in the tubes, and will pull them at 20 hrs to see how they are holding up. 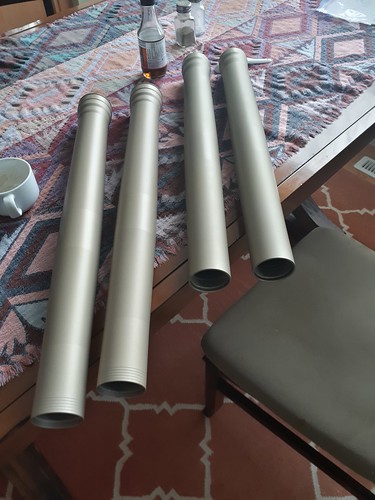 here’s the BETA in its full glory! 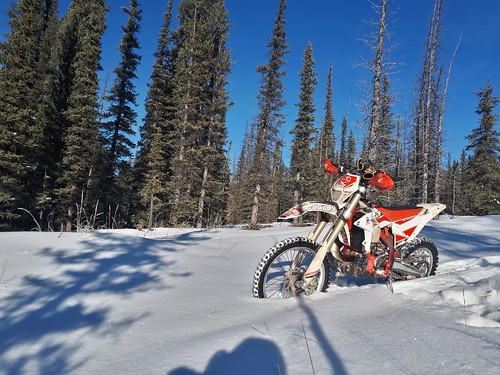